Located at the entrance to Durban Harbour, the busiest port in Africa, the Durban Point Waterfront is one of South Africa's most significant and exciting property development and investment projects. Destined to become one of Durban's most prestigious addresses, and a key tourist attraction, the Durban Point Waterfront is rapidly transforming from a previously run down precinct into a multi-billion Rand property showcase.

With the first phase of the 14 mixed-use apartment, entertainment and retail complexes nearing completion, the Durban Point Development Company (DPDC) has recently released prime new development land in Phase 2 of the of the overall development plans and an exciting new era in the history of the new Point Waterfront is upon us!!!

The Durban Point is one of Durban's most historic and significant urban quarters. It has a superb location and enjoys access to a range of modes of movement including pedestrian, road, rail and sea, and therefore has local, national and international connections.

Over the years, Durban Point has been subject to creeping blight that has left it largely abandoned and vacant. Paradoxically, it represents of the most under utilised assets within the city of Durban. Intentions to revitalize the area have been mooted for several decades and it is only now, that it is finally undergoing significant redevelopment.

Much of the renewed impetus for this initiative has been the implementation of the uShaka Marine World project. This "must-see-must-do" attraction was consciously targeted at creating a development impetus for the city, and Durban Point in particular, and is regarded as the catalytic project for the 55ha Durban Point Waterfront site.

The trigger for the development of Durban Point can be found in the water reticulation and purification system for uShaka Marine World and the need to return that water to the sea via a canal. This led to the idea of creating a unique "waterfront city within a city" in which a system of canals forms the central spine of urban re-development and where the economic benefits of water frontage extend throughout the area.

The Durban Point Waterfront initiative is therefore not just an attempt to extend the city fabric in a banal way, nor is it intended to transform the area into an extended theme park or tourist resort. Rather, Durban Point Waterfront has become an important, well-defined and exciting additional to the city and a sought-after place to live, work and play. 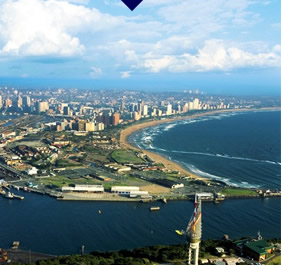 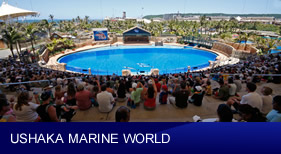 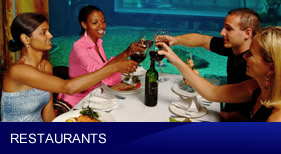 Durban is a uniqe blend of cultures and this is reflected in the vast variety of restaurants on offer in the area. From the well known family fast food franchises to ethnic themed eateries Durban is a gastronomic delight. If you're looking for something spectacular try the Cargo Hold in the Shipwrek at uShaka Marine World where you dine with a full view into the shark tank. 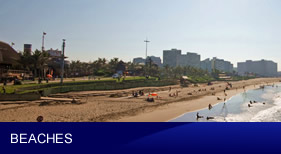 Durban's beaches compare with some of the best in the world for beach goers and surfers alike. Often referred to as South Africa's own Miami beach these golden sandy beaches have an idyllic view of the warm Indian Ocean. Sunrises and sunsets can be viewed from the numerous five star hotels and luxury apartments that overlook the ocean. 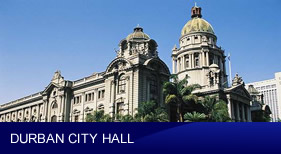 Completed in 1910 this Modern Renaissance style building is now home to the Durban Art Gallery which is a centre for international and South African art collections including works from current and historical finds. Some of the works included are anonymous carvings, clay pots and beadwork as well as French and Chinese ceramics and early glass vases. 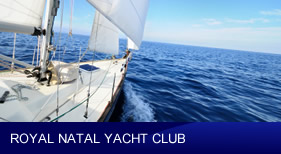 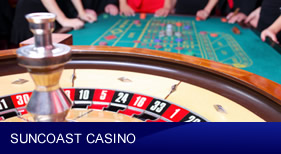 Welcome to Great Fun and Good Fortune! The Suncoast Casino & Entertainment World is where you win big, more often. If winning is on your agenda, then the world-class casino, with both smoking and non-smoking facilities, 1250 slot machines and 50 game tables, will not disappoint you. Add to this a luxurious Salon Privé, Private Gaming Rooms and ample food and bar facilities.

Tourism KZN
Completed in 1910 this Modern Renaissance style building is now home to the Durban Art Gallery which is a centre for international and South African art collections including works from current and historical finds. Some of the works included are anonymous carvings, clay pots and beadwork as well as French and Chinese ceramics and early glass vases. Visit Website
The City of Durban
Durban is blessed with balmy weather all year round, making it a perfect holiday paradise. The beachfront is bordered by five star hotels and luxury apartments, all of which have an idyllic view of the Indian Ocean. Durban is an exciting city in which to play, shop, experience the nightlife and to relax. It's a city in which business and debate issues, which have far-reaching effects, not only on Africa but way beyond its borders, are discussed. Visit Website
uShaka Marine World
uShaka Marine World is a world-class marine-based theme park based at the Durban Point. It has developed out of a vision to create a world-class entertainment and tourism destination for Durban and All of South Africa. Visit Website
ICC Durban
ICC Durban voted `Africa`s Leading Conference Centre` by World Travel Awards. A focal point of Durban's business district, the International Convention Centre Durban is a functional space in an aesthetic environment. Centrally located and just a quarter of an hour from the airport, ICC Durban is minutes from hotels and beaches. Visit Website